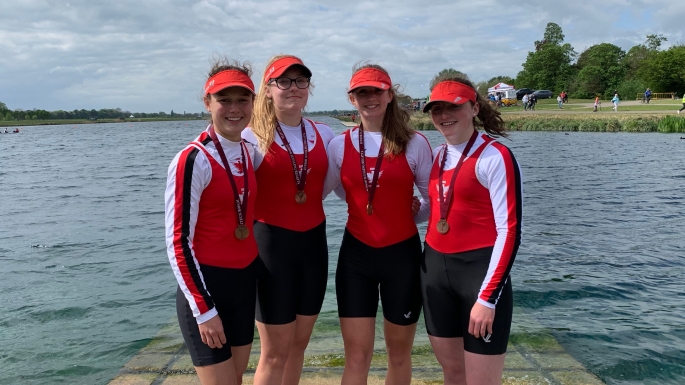 BMSBC took the girls squad to The Junior Sculling Regatta. After a successful camp it gave the girls an opportunity to get some quality multi-lane racing  in, setting them up for the regatta season.

After a sociable leaving time for the senior girls, both crews raced a ‘head race style’ time trial to determine either an A final, B final or elimination.

First up, the WJ18 4X- of Lara Brittain, Abi Ngwang, Imogen Eales and Lizzie Rowe came in 9th overall, meaning they had gained their way into the B final.

Over to the WJ16 4X-, of Hope Chouffot, Ellen Fletcher, Georgia Smith and Emily Watson. This crew have been training consistently together, which really showed in the time trial, coming 3rd and beating crews that they hadn’t before  made them hungry for a medal.

It was fantastic for both our senior quads to make finals and experience their first side by side racing for this season. Coming 4th, the WJ18 quad got off to a slightly slower start however played to their strengths, trusted their fitness and started to row through crews in front. This race allowed them think about what they now have to work on as well as all the positives they can take from it.

Our WJ16 quad, a very competitive crew knew there was a medal up for grabs and didn’t hold back when the buzzer went off.  They knew that if they could start out in front this would give them the best chance. Out of the start they were straight into first position, this gusty performance allowed them to stay here up to the half way mark. As the race progressed they could see the other strong crews edging closer. In this race, other crews were just that little bit faster through into the finish. The girls raced a very exciting race and achieved a very well deserved bronze medal.

Our WJ15 squad were excited to get some ‘proper racing’ in after perfecting their standing starts during camp. The WJ15 quad of Grace Brady, Freaya Rudd, Priya Lehal and Nika Bezchi, coxed my Elin Thomas had a large entry with plenty of tough competition. The girls got off the water, very pleased with how they rowed, where they really felt an improvement in their overall performance since camp. They unfortunately just missed out on a final. The girls were gutted, however, decided to take this as motivation to continue to work hard.

The double of Lilly Brittain and Katie Pratt decided to aim high to make the A final. Coming in 4th position meant they had earned their place and were determined to see what they could achieve. Out of the blocks the girls showed off their bravery and got fully involved in the race. As the race went on the girls focused on competing against the two crews in the lanes either side of them, giving them a bit of a fright, other crews started to push away. The girls came 6th after a very bold approach to their final.

A good days’ worth of racing all-round, Well rowed BMS.